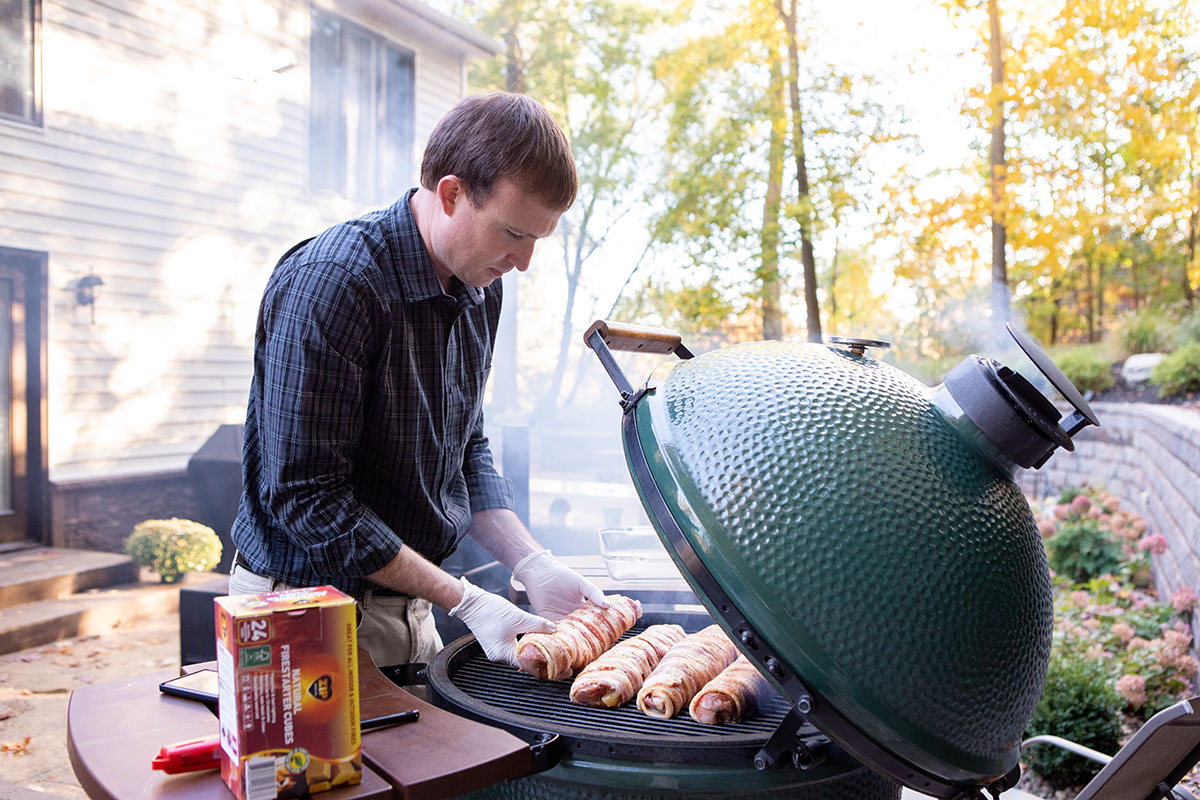 I first tasted a bacon-wrapped apple-stuffed pork tenderloin at our 2019 Eggfest. I don't remember which Egghead made this recipe, but I was impressed with the blend of flavors from the pork, salty bacon, and sweetness of the apples. I’ve made this recipe a couple of times for family and friends and decided to try my hand at it again to share with you here.

Getting this recipe to look great on the plate is a bit challenging, but I think you’ll be impressed with the outcome.

If you don’t have enough people around to eat this much at once, you can easily halve or quarter it. 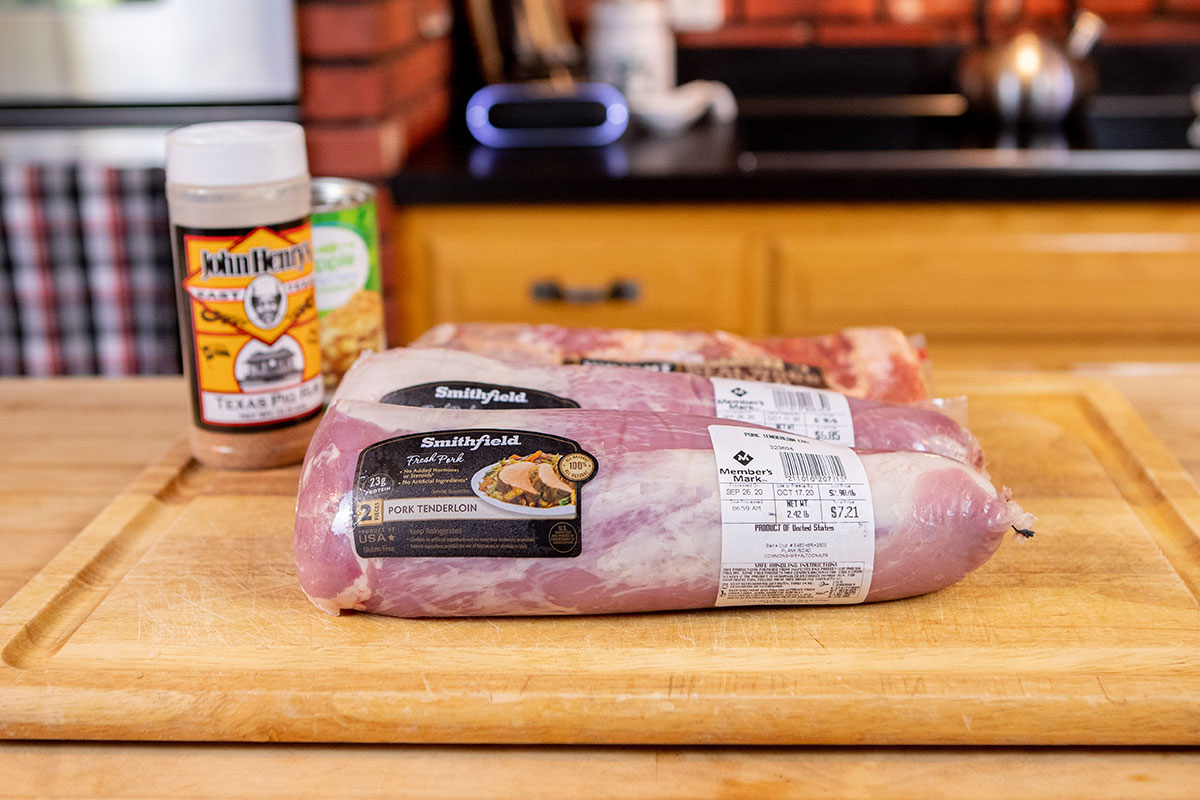 I purchased these 2-pack pork tenderloins from Sam's Club. 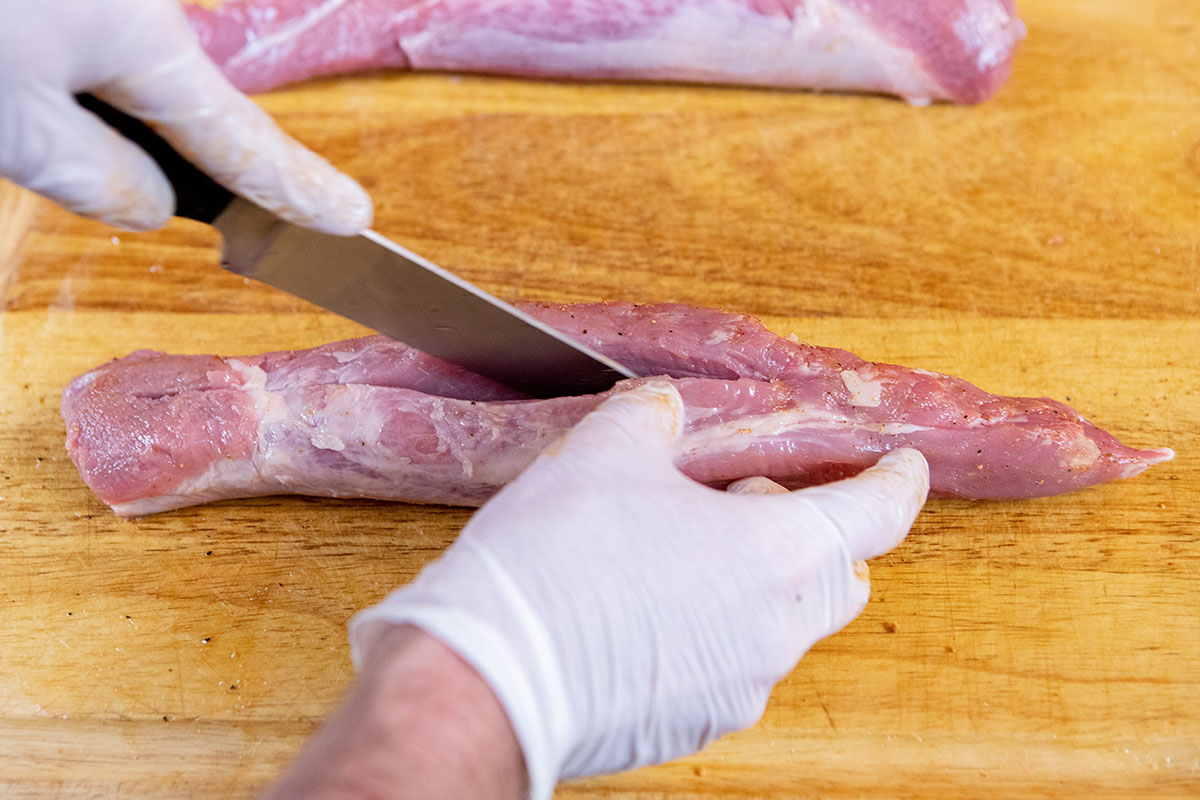 A pork tenderloin usually has a wide edge and a narrow edge. Slice into the narrow edge to get a deeper "pocket". Cut as deep as you can without severing the two sides. I used store-bought apple pie filling with whole slices. Arrange the apples in the pocket with some of the glaze. Season the outside of the pork tenderloin with your favorite pork seasoning. I used John Henry's Texas Pig Rub. I've tried spiraling one piece of bacon around the tenderloin at a time, pinning it on with toothpicks, but it's time consuming and difficult to get it looking good and I don't like to hassle with the toothpicks. Here is a method I've come up with that works pretty well.

Arrange 8 pieces of bacon next to each. They should touch, but not overlap. Set the tenderloin on top of the bacon at an angle as shown here with the thinner end even with the edge of the bacon and the thicker end extending beyond the bacon "mat" on the other side.

The tails of the bacon should extend beyond the tenderloin (roughly 1" on the thinner end and 2" on the thicker end). Wrap the bacon tails over the tenderloin. The tenderloin should make a complete revolution and finish right side up with the bacon tails on the bottom. Sprinkle a bit of seasoning on the top if you wish to. These are ready for the grill now. For this recipe I’m using my Big Green Egg and firing it with Rockwood Lump Charcoal. I set the Egg up for indirect heat and my target temperature was 325 degrees F. To fire the Egg, I nestled 2 wax firestarter cubes into the charcoal and lit them with the bottom vent fully open. I kept the lid open for 10 minutes or so to get the fire going quicker, then I added the convEGGtor and cooking grate and closed the lid with the top vent open all the way.

After the temperature climbs within 50 degrees of my target temperature, I start adjusting the top and bottom vents. For cooking at 325 degrees, adjust both vents to about 3/4"–1" open and then make adjustments to give it more or less air as needed to dial in the temperature. The Big Green Egg is an excellent choice for direct heat grilling, indirect smoking, as well as baking desserts and casseroles. It's well insulated so you can shut it and kill the fire on demand, which makes it perfect for someone who occasionally needs more space, but also wants to cook for 2–4 people. The goal is to cook the meat without drying it out, render enough fat in the bacon to make it delicious, and to soften the apples. It took a little less than 1 hour to cook these. Get Your Own Big Green Egg I didn’t rotate these or do anything with them as they were cooking, so it was quite easy.

Probe the thickest parts of the tenderloin with an instant-read thermometer, such as the Thermapan MK4 to know when they are done. Remove them from the grill once the coolest part of the meat has reached 145 degrees F and the bacon is done. 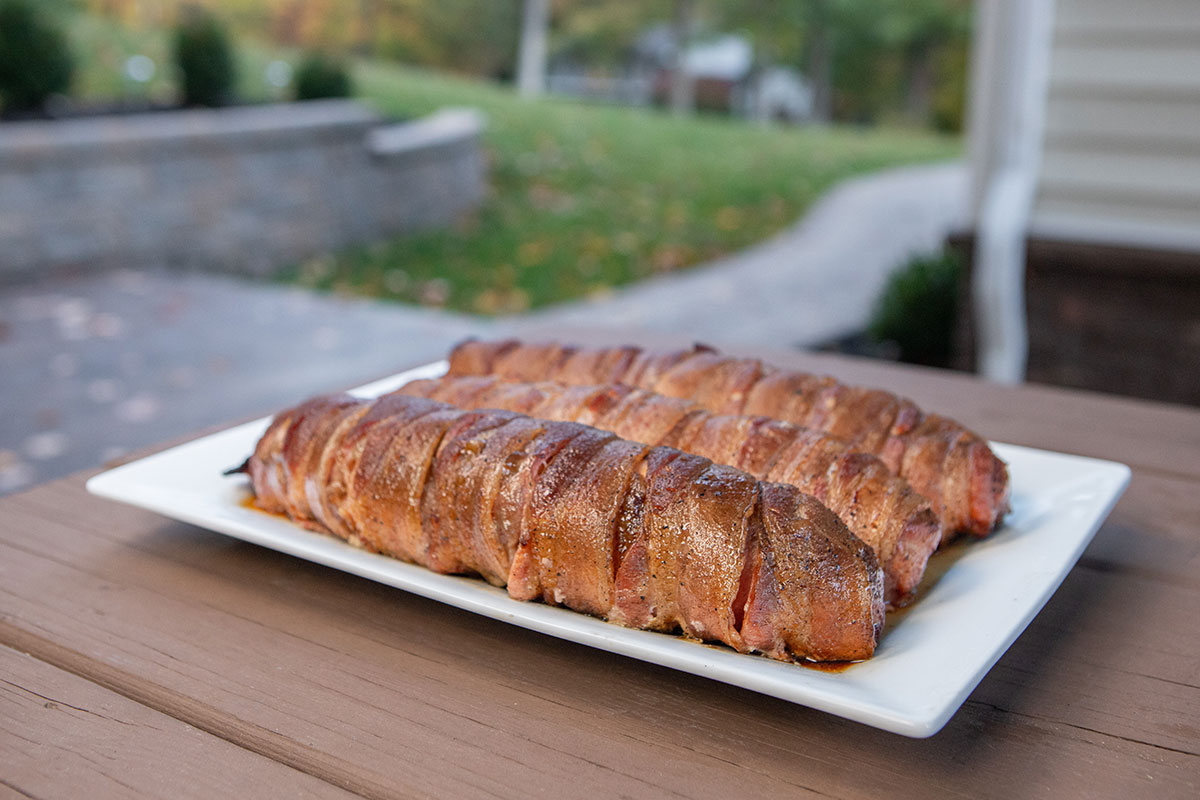 Alternate cooking method: You could cook these with direct heat if you turn them as needed to keep the bacon from burning too much. The meat would cook faster, but it would take more tending and have less time to acquire a smoky flavor than my method.

If you’re only cooking one or two of these with direct heat, it would be easy to build a fire on one side of your grill and cook them indirectly for a while, then move them over the fire, rotating it every few minutes to crisp the bacon on all sides.

Optional filling: If you want more apple flavor, you can heap on the apples. I prefer having just a little to flavor the meat, but it’s totally up to your preference as long as you can contain the apples in the bacon. You could also chop the apples finely for a different texture. I’ve made this recipe several times now and the last time I made it, the apples did not soften as much as they should have, so you may want to cut the apples into smaller pieces or use pie filling with diced apples instead of slices. When serving these, slice them in 1/2” slices or the thickness of your choice.

After it’s sliced, everything will want to fall apart and thick juice from the apples or pie filling glaze will run out on your cutting board, so don’t expect an elegant presentation, but the flavors really do make up for it! The Big Green Egg is versatile and durable and designed to grill, smoke, roast, and bake.