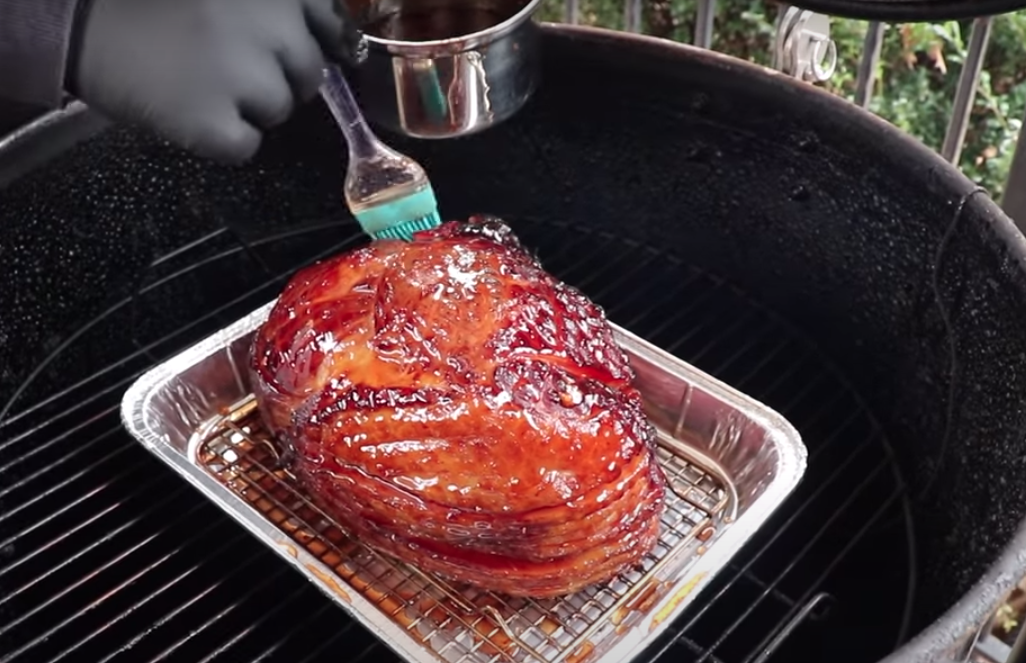 Would you like a recipe for a smoked holiday ham that looks and tastes amazing, but is super simple to make?

If you want a stunning centerpiece for your Christmas feast, but don’t want to spend all day preparing it, this double-smoked, spiral sliced ham recipe from Malcom Reed is definitely worth a try!

In this video, barbecue legend Malcom Reed shows an incredibly simple method for turning an inexpensive, supermarket ham into a mouthwatering feast that will delight your Christmas guests.

What makes this recipe so simple is that most of the work is done for you before you start. By starting with a fully cooked, spiral sliced ham, you eliminate most of the work involved with a traditional barbecue recipe.

Spend more time with your guests and less time at the smoker!

Credits: The instructions and screenshots in this post were taken from the video above. We've outlined the process in writing to help make this recipe a success on your first try.

Used in this recipe:

Just a plain smoked ham is great. There’s no need to spend extra money for a honey-glazed ham because you will be dressing it up with a raspberry chipotle glaze. We do recommend using a spiral sliced ham as that will allow more of the flavor from the smoke and the glaze to get to the inside. Plus, it will be easier to serve once it’s done. We carry premium spiral sliced hams seasonally in our store. In this video Malcom uses the Gateway Smoker with Royal Oak charcoal briquettes, but you can use whatever smoker you have. Our drum smoker of choice is the Harvester Drum Smoker from Cotton Gin. You’ll want to maintain a temperature of about 275 degrees Fahrenheit.

Throw in a couple chunks of cherry wood or other mild-flavored wood to give it that extra level of smoke flavor. All you need to do is take the packaging off of the ham and place it on a wire rack for smoking. The glaze will be added later.

Put the ham in the smoker and leave it until it reaches an internal temperature of about 140 degrees. For a ten-pound ham this should take about two to two-and-a-half hours. The exact internal temperature isn’t critical since the ham is already fully cooked—just make sure that you don’t cook it so long that it starts to dry out.

While the ham is smoking, you can move on to step five and make the raspberry chipotle glaze. Start by putting the apple jelly in a sauce pan and heating it until it’s melted. Once it’s melted, put in about an equal amount of the raspberry chipotle barbecue sauce. Stir it and bring it to a slight simmer. Keep the glaze over low heat for about thirty minutes, stirring it occasionally. Keep an eye on the glaze to make sure it doesn’t burn. After the ham has been in the smoker for nearly two hours you can go ahead and put the glaze on. Set the wire rack with the ham into a foil pan to catch the drips. Brush the glaze all over the ham, letting it run down the sides and soak into the surface. Leave it in the smoker for about half an hour to let the glaze set.

Purchase a Basting Brush and Pan

Step 7: Remove the ham from the smoker. Step 8: Place the ham in your favorite serving dish and enjoy! Are you looking for a simple and affordable backyard smoker that is built to last?

Don't have the supplies you need?

Shop some of our barbecue supplies and equipment here in our online store or visit our store in person for a full line of barbecue equipment and supplies.

Can't find what you need online? Visit our specialty barbecue store at 140 W Main Street in New Holland, Pennsylvania to immerse yourself in many of the best products available for anyone wanting to make delicious food outdoors. Our store hours are listed at the bottom of this page.

About the author: William Hertzler is a writer and social media manager at Meadow Creek Barbecue Supply.